Introduction to Linux bidirectional replication for backup and file mirroring 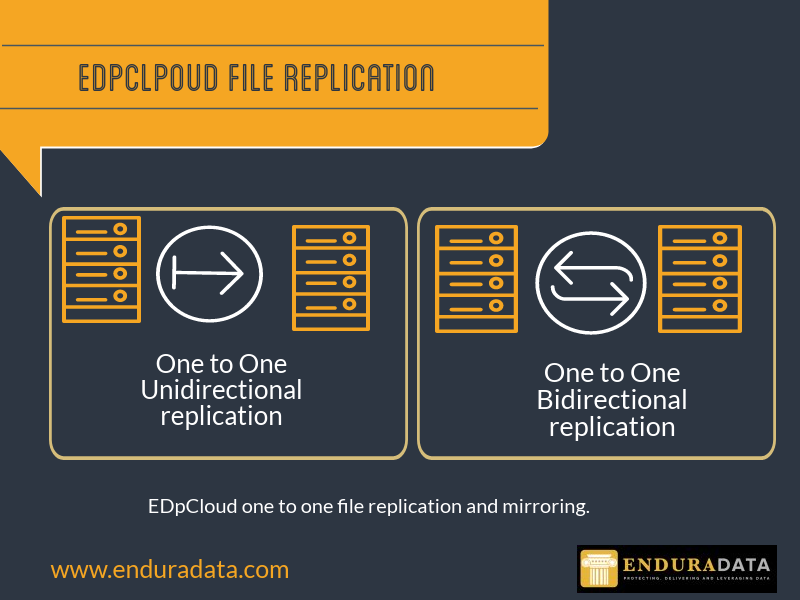 In this blog, we will learn how to configure EDpCloud software for Linux bidirectional data replication and to synchronize data back and forth between two Linux servers (For backup and sync purposes, online file mirroring, or process automation). Bidirectional replication is also known as two-way sync. Whenever a file changes in one server, it also changes in the other server, mirroring files and the content of the two servers. Any changes in one server will also happen on the other server and vice-versa.

Our objective here is to back up and sync one Linux server to another and vice-versa.

For example, if you modify file “foo” on a server called “svr1”, file foo will also be modified on server “svr2” and vice-versa(by sending only the deltas or the part of the file that changed).

You can also do the same thing I describe hereunder windows, but I will specifically discuss the Linux Bidirectional Replication here.

Without delay, let’s jump in and see how we can configure Linux real time bidirectional replication and filesyc to mirror file systems on servers or virtual machines.

Details about the installation can be found in the articles cited above.

2.  vi includes and add all the directories you want to include in the replication

Excluding and including files from data synchronization.

Your includes much have only the directories you want to be included. If you don’t have an include file, everything is included by default.

Add the following two lines using a text editor (or the browser-based GUI). This will allow the servers to only include the files that match the patterns below in the bidirectional data replication. Make sure you do the same on both servers.

This will only replicate and mirror files that are under /data and the directory /data itself.

Again see the post about excluding files from replication. It is critical that you exclude all directories such as etc, var, etc. The default excludes such a list. I cannot stress enough how important it is to use includes and excludes to avoid mirroring files in /etc such as the passwords, the hostnames, and IP addresses. Make sure you use the includes to specify what to replicate.

Install FUSE if your system does not have it already

EDpCloud requires FUSE. You can find the sources under $ED_BASE_DIR/edpcloud/src

You can install fuse under /usr/local or under $ED_BASE_DIR/edpcloud

/etc/ld.so.conf (assuming you installed fuse there)

Notice that the data replication configuration above will not propagate deletes between the two systems. To propagate deletes, we need to add the keyword deletes=”1″ to eddist.cfg as the following example shows (But don’t do deletes=”1″ unless you know what you are doing).

Run the following command to start EDpCloud, and you will be on your way to synchronizing data between the two servers in real-time thus ensuring that data is backed up between the two.

Run edstat to make sure edpcloud is running before you proceed to the next step. Do not proceed unless edpcloud is running without the real-time configuration. If you run into problems, check eddist.log to find out what is wrong with your data replication (Other logs can be found in  $ED_BASE_DIR/logs)

Replicate some data by using:

run edstat again and verify that your files were replicated to the receiver side.

Do all the previous steps for all hosts in eddist.cfg. Once scheduled and on-demand replication and backup are working, proceed to configure the real time replication and synchronization.

Add this line to the file and save it.
/data

This tells EDpcloud to monitor /data for changes and queue them for replication to the remote server.

Source in the environment (notice the dot):

if all works, you should see the directories in edfsmonitor.cfg mounted (use df to see what is mounted)

Your real time bidirectional replication is now configured, and any files that change in directories, listed in edfsmonitor.cfg, on one system are replicated to the other remote system.

Including and excluding files from data synchronization and online backup